The Tale Of Daphne And Apollo

Antakya’s 2000+-year history is among the most eventful, brilliant and tragic in a region where such histories are commonplace.

The tale of Daphne and Apollo has been told for many years. It is said that this sorrowful story happened in Harbiye which is located in the southwest of Antioch.

This charming myth talks about the platonic love of god Apollo for the beautiful nymph Daphne. It is said that Daphne was the first love of Apollo but unfortunately the girl never responded his love. It was not usual or possible for a nymph or a mortal woman in the Greek mythology to resist to the love of a god, but Daphne did so and in fact, she lost her life trying to escapethis love..

Everything started with a dialog between Eros, the god of love and Apollo, a skilled archer who was the son of Zeus and Leto. During the period when Apollo was the god of sun, he doesn’t forgive himself about a snake he killed and to cleanse his godship, he starts to play lyre. One day when he wanders around, he sees the sweet baby-faced Eros. He goes near Eros and says:

-Eros, that arrows on your back doesn’t suit a baby-faced god like you. Give them to me so I can use them in battle, you know I use them well. Eros answers:

-Yes, Apollo I know you do, but why do you underestimate me, remember that my arrows can come at you too.

This dialog makes Eros angry and he thinks of taking revenge on Apollo. He shoots an arrow of hatred at Daphne who is passing by, and after that Daphne’s heart is closed to all love on the earth. Just then, Eros shoots an Olympian arrow of love at Apollo. At that moment, Apollo has a crush on Daphne. Every day he descends from sky to search for the beautiful Nereid to marry her. Apollo explains the situation to Daphne’s parents, but no matter how much they insist, Daphne refuses to marry. Every day Apollo secretly watches this beautiful Nereid, but watching isn’t enough for him anymore. One day when he is watching her, he thinks to himself “I’m the strong, handsome, brave Apollo” and encourages himself then confronts Daphne. 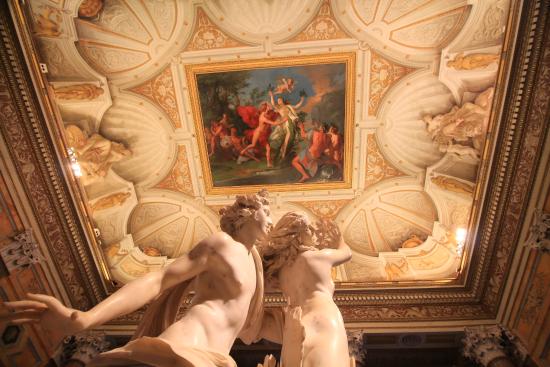 Seeing him, Daphne starts to run and Apollo after her:

-Oh beautiful Daphne, don’t run away from me. I’m Apollo, the god of Sun and music, not your enemy. Under the effect of the arrow of hatred, Daphne doesn’t stop and goes on running and love-hungry Apollo goes on chasing. When he chases, he constantly pleas her to stop. Watching on Olympus, Zeus didn’t help his son, no matter how sorry he is about this. Exhausted from running, Daphne can’t run and asks for help from her father Ladon, god of rivers. Ladon turns her into a Daphne tree. Her feet becomes roots, her torso becomes stem and her hair becomes leaves.

The tears that drops from her eyes becomes a waterfall.

Apollo makes a circlet from leaves and wears it all the time. The waterfall and Daphne trees are located in Harbiye neighbourhood in Antakya district of Hatay.

King of the Collectors: Charles I